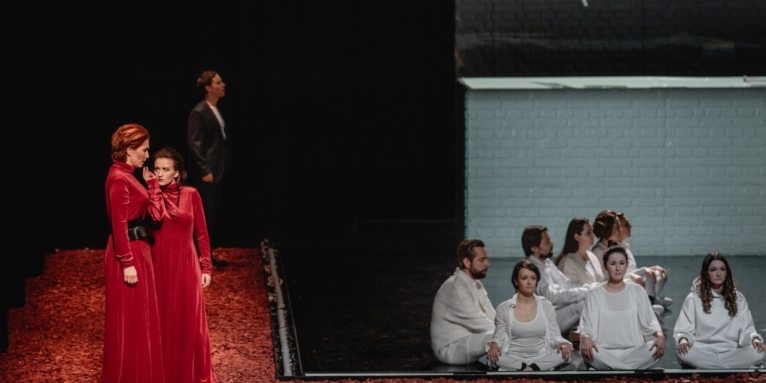 A great challenge of the French Baroque and a field for experimentation for a contemporary Israeli artist. Opera Rara 2019 began with elegance worthy of France. The Opera Rara Festival was inaugurated by the premiere of Hippolyte et Aricie – Jean-Philippe Rameau’s lyrical tragedy directed by Sjaron Minailo. The work from 1733 in five acts retells the mythological story of a tragic love of Queen Phaedra to her step-son Hippolytus. The unrequited love becomes the cause of conflicts between the protagonists of the opera and shakes the life of the royal court like an earthquake.

Sjaron Minailo created the spectacle with elegance worthy of France, all while maintaining a balance between music, libretto and movement, thus proving that it is possible to build a bridge between the past and tradition spanning centuries with contemporary interpretation. This harmonious play, created with respect for music, is a tribute to the history and style of French Baroque opera, characterised – just like this work by Jean-Philippe Rameau – with discreet elegance and sophistication, as well as naturalness, at least in the case of Hippolyte et Aricie. Minailo decided to go with sparse set design, devoid of decorations, dominated by the subtle play of light dictated by the narrative of the piece, as well as unobtrusive symbolism and colours. The colours of the French flag – blue, white and red – dominate the stage, with red-brown leaves covering the stage bringing to mind both love and bloodshed. The director’s intention was to ask the audience how often we are tempted to break the rules of the world and how easily we succumb to temptation. Although Hippolyte et Aricie tells us a story from the ancient world, its message remains relevant, because human desires and weaknesses are the only constant in our world.

The choreography of the gestures made by the performers, the movements of the choir or solo dancers remaining in the background served as an additional commentary for the action taking place on the stage. Their movements embodied the emotions and internal conflicts faced by the protagonists of this tragedy – love, a feeling of betrayal, unfettered or unfulfilled desires. Sjaron Minailo’s Hippolyte et Aricie puts itself halfway between a concert version of the opera and its full stage version – it is an exact golden mean, as by doing it in such a way the interpretation does not disturb the perception of the work – it is not too embellished and does not overshadow the artistic qualities of the work.

Hippolyte et Aricie is Jean-Phillippe Rameau’s late debut as an opera composer. Like his earlier works, the opera is distinguished by its fresh – for the 18th century – approach to instrumentation and use of the orchestra. What is more, the performance directed by Sjaron Minailo showed that this music still remains relevant – even today.

The atmosphere is created by Rameau’s music that is rich in a variety of tones. Using music, the composer evocatively depicted a storm, sea waves, as well as sweet and delicate singing of birds in the opera’s finale. Being attentive to the tones of the instruments and their combinations, he introduced a vocal trio with low and warm sounding accompaniment of bassoons between arias and recitatives. He also allowed instrumental parts to overshadow the singers. The tonal nuances of the score were interpreted with due sensitivity and care by Marek Toporowski, who led the Kraków Festival Orchestra – an ensemble characterised by its precise performances, playing historical instruments. Rameau’s opera also features successful choral parts, which were performed flawlessly by the exquisite Capella Cracoviensis Choir. Both ensembles were joined by an international line-up of soloists. The main roles were given to the Eamon Mulhall (Hippolytus), mezzosoprano Michaela Selinger (Phaedra), bass Jerzy Butryn (Theseus) and soprano Nika Gorič, who played Aricia. Gorič and Mulhall formed a harmonious vocal duo, Michaela Selinger impressed with the lightness of performance, balanced gradation of emotions and perfect control of her voice. That evening, Jerzy Butryn also received a loud applause for his performance as the tragic, yet strong Theseus.

Hippolyte et Aricie was an experiment – both in Rameau’s times, as well as for the contemporary director and performers. Sjaron Minailo wanted to create a refined performance that would be true to the spirit of the epoch, all while giving it a fresh and relevant dimension. This experiment proved to be successful.