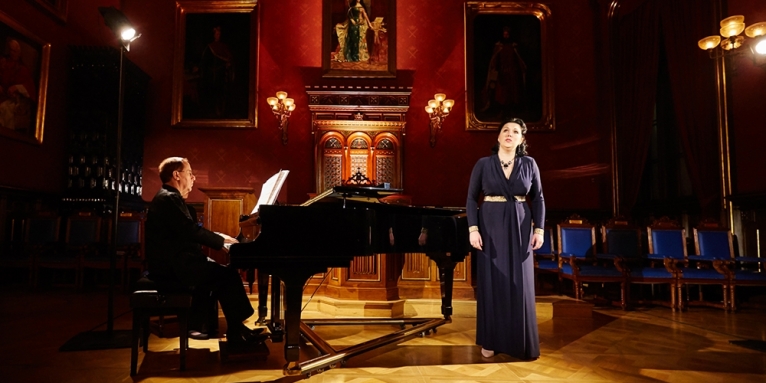 Could there be a better relationship for romantic poetry than the one of words, music and beautiful vocals? By touching the most delicate strings and feelings, soprano Evelina Dobračeva reassured the audience that lyricism can be expressed to its fullest mostly through singing. The artist, born in Russia and associated with Germany for many years, performs on the stages of the Berlin Philharmonic, Wiener Konzerthaus and Royal Festival Hall in London. The Krakow audience had the opportunity to listen to her for the first time at the 2018 Opera Rara Festival, performing the demanding and difficult Erwartung by Arnold Schoenberg. This time, the singer showed the lyrical side of her musical personality.

The programme of her recital included songs by three great Russian composers: Pyotr Tchaikovsky, Nikolai Rimsky-Korsakov and Sergei Rachmaninov. In total, it featured nineteen romances, lullabies and serenades presenting the different shades and states of love – infatuation, fulfilment, anticipation, longing, and torment. The repertoire, which the artist learned by heart, comprised a diverse anthology of Russian songs of the 19th and 20th centuries. With subtle gestures and facial expressions, Dobračeva painted all the colours of love with her dark, deep voice. The singer interpreted the lyrics of all the songs very carefully – not only did she sing lyrical confessions using the language of musical feelings, but also illustrated the mood and landscape painted between the verses. In Rimsky-Korsakov’s Не ветер, вея с высоты (Not the Wind, Blowing from the Heights), she masterfully unleashed her voice into a balanced crescendo, reminiscent of gusts of wind; in Rachmaninov’s Сирень (Lilac), she painted the picture of a sunrise and dawn with a subtly quieter voice. The artist impressed the audience with the power of her voice and precise control over it. Evelina Dobračeva’s singing perfectly combined poetry with music

However, the attention of the audience was not only focused on the artist. The accompaniment of each song was an example of the excellent Russian school of piano, which was exemplified by Semion Skigin, a renowned pianist who accompanied Evelina Dobračeva that evening. The piano parts in each of the performed songs constituted instrumental miniatures, with some masterful fragments and inclusions, which built the mood of the concert. Skigin perfectly painted the broad spectrum of tones, emotions and colours contained in the musical score, with his characteristic sensitivity. He created a successful duo with Dobračevá – no wonder, since both are intimately familiar with Russian repertoire. However, the recital would not sound so nostalgic and elegant if it was not for the natural understanding of Russian temperament and intonation of the native language. Works from the salons of St. Petersburg and Moscow sounded great in the Hall of Collegium Novum of the Jagiellonian University, whose interiors created a perfect ambience for the concert.

As an encore, the soprano performed two arias: from Tchaikovsky’s Jolanta and “O mio babbino caro” – a famous aria composed by Giacomo Puccini for Gianni Schicchi, amazing the audience and ending the evening on a sentimental note, touching the most sensitive strings in the soul and heart. After all, this is all what poets, musicians, and all the romantics cared about, and this was definitely one of such evenings, filled with poetry and lyricism.