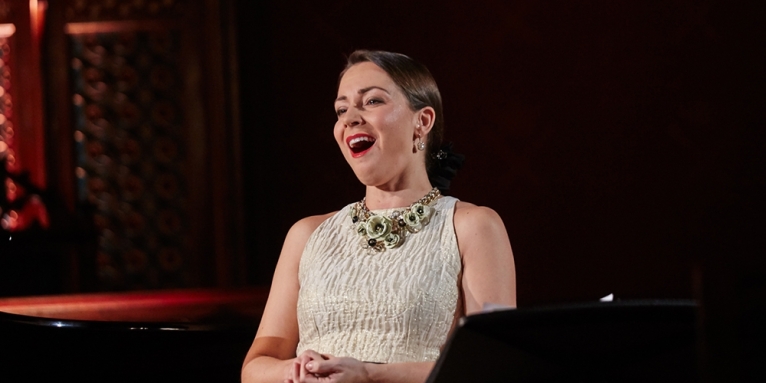 The lyrics of one of the songs performed by Adriana Kučerova during a recital at the Opera Rara Festival – “I hate music, but I like to sing” – sounded really perverse in retrospect. Was it also an honest confession of the Slovak soprano? Adriana Kučerova's recital presented the melodies of folk songs adapted by Béla Bartók and Antonín Dvořák to the Krakow audience, starting with cheerful, small songs by two Slovak composers, who were previously virtually unknown to the Polish audience: Mikuláš Schneider-Trnavský (1881-1958) and Eugen Suchoň (1908-1993), who were involved in editing Slovak folk songs and were inspired by the authentic folklore of their country. The programme of the first part of the concert was complemented by two series of lyrical songs by Antonín Dvořák – V národním tónu, op. 73 and Cigánské melodie, op. 55.

The recital programme alternated between joyful and humorous songs, such as Z jednej strony Moravy Suchonia, which was repeated for an encore, as well as lyrically sentimental ones, including Dobrú noc, má milá – a song opening Dvořák’s V národním tónu. Adriana Kučerová has been familiar with folk repertoire from a very early age – she grew up in a region where folklore is still alive and where she heard these songs in their authentic arrangements and performances. This in-depth knowledge of the Slovak musical tradition turned out to be vastly beneficial to the soprano, who offered us the best interpretation of the works she performed, characterised by her lightness and sensitivity.

The artist perfectly captured the mood of each of the songs, moving the audience with her tender melodies, later cheering them up with perverse or dancing songs. She enchanted the listeners not only with her clear, resonant voice, but also with her energy on stage and her beautiful smile. The natural singing, modulation of the tone of the nostalgic phrases of melodies and the artist’s attention to dynamic nuances helped create a proper atmosphere and strengthen the audience’s belief in the authenticity of the emotions expressed by the songs.

One of the most interesting elements of the performance was a series of five Slovak songs entitled Dedinské scény by Béla Bartók, presenting the theme of marriage. This great Hungarian composer, was linked with Slovakia by his life and work – he studied in Bratislava, his mother came from Martin, he devoted his life to the study of folklore – which became an inspiration for this composition.

Kučerová also proved to be an excellent actress. Her dramatic talent was highlighted not only by the interpretation of each of the songs of the first part of the recital, but also by a series of funny, perverse children’s songs by Leonard Bernstein (I Hate Music! A Cycle of Five Kid Songs), which present a monologue of a ten-year-old girl tired of constant musical rehearsals. For the finale of the recital, the soprano surprised the audience with a contemporary musical puzzle piece by Evgeny Irshai, Menuet na ostravé, with sound effects, whispering syllables and clapping. With these performances, the soprano successfully captivated the audience in the second part of her performance.

The artist enthralled the Krakow concert-goers with her singing, but also with her artistic and stage personality. The interesting programme of the concert presented the mostly unknown repertoire of our neighbours, and the joy and cheerfulness, which the artist was teeming with during her performance, had a lasting impact on the audience. The soprano was accompanied by pianist Róbert Pechanec.

Adriana Kučerová, an opera star in her native Slovakia, has performed on the stages of La Scala, Vienna Opera, Berlin Opera, Bavarian Opera and Paris Opera, she is also known to the audience of festivals in Glyndebourne, Salzburg and Ravenna. She has performed under the batons of many renowned conductors, including Nikolaus Harnoncourt, Riccardo Muti, Daniel Barenboim, Gustav Dudamel and Vladimir Jurowski. The soprano’s success is hardly a surprise – her stage personality and singing talent make her performances, as well as her solo recitals, a great pleasure – and undeniably a great artistic experience.