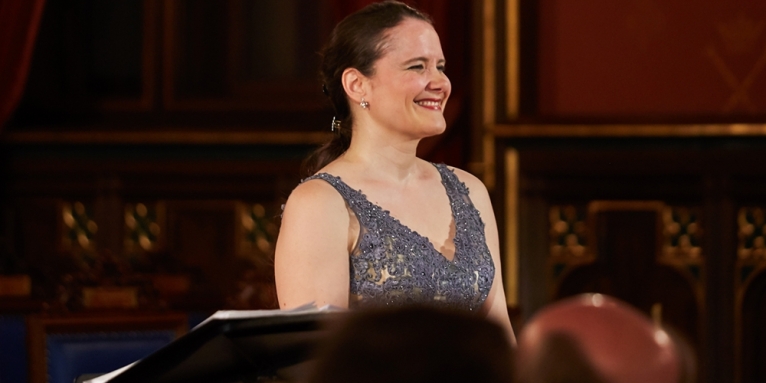 Sophie Karthäuser’s recital is another evening with a music star, presented as part of the Opera Rara Festival, featuring a highly regarded singer, coveted by the most important music stages in the world, who performed in front of the Krakow audience. The renowned Belgian soprano is one of the most sought-after and awaited artists, collaborating with the most prestigious ensembles and orchestras, including Les Arts Florissants, Akademie für Alte Musik Berlin and The Academy of Ancient Music. Her recognition stems mainly from her masterful interpretations of Mozart’s music and performing main roles in his operas. She has successfully performed at the Théâtre des Champs-Elysées, Berlin's Konzerthaus, Carnegie Hall in New York and at the Aix-en-Provence Festival, performing with outstanding conductors, including Kent Nagano, Nikolaus Harnoncourt, Marc Minkowski and Philippe Herreweghe.

For her recital in Krakow, the artist selected songs dating back to the 19th and 20th century tradition of leading musical styles – German Lied and French mélodie, which were composed to the best poems of their times. Performing songs to the poems by wordsmiths such as Lenau, Eichendorff, Heine, Goethe, Hugo, Verlaine and Baudelaire require the performer to be artistically mature. With her rich musical and lyrical imagination, Sophie Karthäuser has taken great care of the credibility of her interpretation.

The first part of the concert featured songs from the German cultural circles, created by Felix Mendelssohn and his sister Fanny, whose music has been brought up and rediscovered in recent years, as well as Clara Schumann. Karthäuser impressed the audiences with her sublime lyricism and reliable technique, which enabled her to focus on the nuances contained in the lyrics and notes. She also enthralled the audience with the power of her full, strong voice, characterised by the wealth of its timbre, attention to precision of phrasing and balanced contrast of her narrative.

Karthäuser was equally outstanding in both German and French repertoire, naturally moving from the dynamic expression in the first part of the concert, to the sophisticated impressionistic and symbolic character of Claude Debussy’s songs. The selection of songs included in the series entitled Un petit bestiaire (included on Le Bal des animaux, an album released by the artist in November last year) also turned out to be just brilliant. Un petit bestiaire featured songs by Gabriel Fauré, Emmanuel Chabrier, Reynald Hahn, Maurice Ravel and Edouard Lalo, which portrayed a selection of birds (ducks, nightingales, peacocks, larks) and a butterfly – this exception was thanks to Gabriel Fauré’s piece. Given this diverse accompaniment, the soprano went for a slightly playful tone and frequent fiorituras in the form of ornaments, trills and vibratos (characteristic of her singing), which effectively enriched the melody and added elegance to the recital.

The atmosphere of the performance was ensured by pianist Eugene Asti, with whom Sophie Karthäuser collaborated during the recording of Le Bal des animaux and earlier albums with music by Francis Poulenc. Asti’s accompaniment was stylish, very agile and brilliant – in the case of songs of Un petit bestiaire, and very dynamic and expressive in German repertoire presented during the recital. The duo of Sophie Karthäuser and Eugene Asti brought about a particular atmosphere of romanticism, symbolism and impressionism.

It was the third master recital of the Opera Rara Festival, which presented a varied temperament of the performers and a wide historical and cultural spectrum of repertoire.