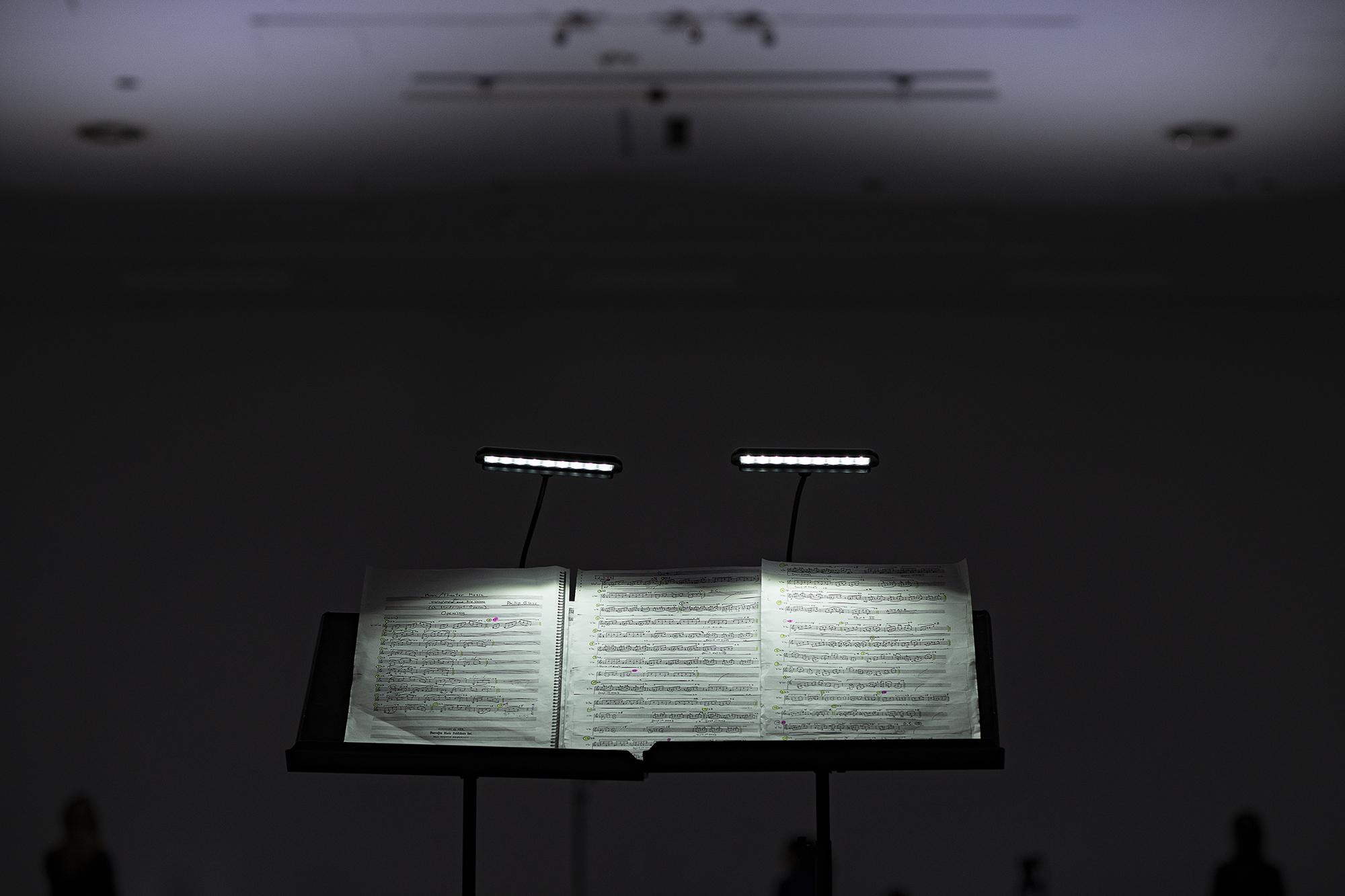 Juxtaposing two completely different and distant musical works in terms of history, aesthetics, genre and form during a single evening, as well as creating a coherent artistic expression is a challenge, which requires the highest levels of mastery, as well as a sprinkle of bravado. Cassandra & Just, a two-part staged piece directed by Tomasz Cyz combined the Baroque solo cantata by Benedetto Marcelli (1727) with David Lang’s post-minimalist film music (2014), all while avoiding leaving the audience without reflection. After all, who can remain indifferent and insensitive to the moving story of pain and loss, misunderstanding, destruction, death and mourning, but also about sweet, edifying love and longing?

Tomasz Cyz managed to build a timeless dialogue around the cantata composed for alto and basso continuo, in which the mythical prophetess Cassandra tells the story of the final years of the Trojan War – a dialogue between the libretto and the poetry of contemporary authors: Anna Kamieńska, Zbigniew Herbert, Alice Oswald, Charles Simic, and Jane Hirschfield. In this discussion, he asked, what is our contemporary Troy: Aleppo, Hiroshima, Sarajevo? Which prophecies do we ignore, while we barrel down towards self-destruction?

The poems displayed during the performance refer to both the myth and the image of the contemporary times. Together with Marcellli’s cantata, they become a musical and literary commentary on social issues. Cassandra’s main problem is still warning the wise and how to caution them against their own wisdom? How to warn those who have divided the world (…), experts in good and evil? How to warn people against people? How to convince them to move away a little, so as not to obscure the sun with their own shadows? The combination of literature and music is also important due to the achievements of Tomasz Cyz to date – not only as an opera director, but also as a literary and musical journalist. Another noteworthy fact is that his approach to the performance also touches upon the theme of femininity: after the wars waged by men, in the name of men’s affairs, after not listening to women’s warnings comes the time for this mutilated world to be mended by women alone. Perhaps that is why his Cassandra is so powerful.

Clarity of the message

Cyz starts with music and words, hence the sparse, symbolic set design with eye-catching plastic bottles covering the stage like the sea and Cassandra, trapped in a huge, Baroque dress with lace and padded shoulders, in a tight corset. During the performance, the prophetess is gradually undressed. Exhausted and naked, she falls into a sea of plastic, as if she was defeated on the battlefield.

The demanding role – particularly from the standpoint of acting – was faced by Łukasz Dulewicz. His Cassandra is a convincing and tragically defeated character. Marcin Świątkiewicz, who dealt with accompaniment, as able to surprisingly diversify the sound of the harpsichord – as for the possibilities of this historical instrument. By opting for sharp and raw tones, coupled with angry and subdued ones, he elevates the rank and meaning of the harpsichord from an instrument that provides accompaniment to one that illustrates and supplements the alto vocal parts.

Cassandra  interpreted by Cyz and this duo of performers could easily pass for a work composed in modern times. Is this due to interpreters and fresh context? Or maybe it was Marcelli, whose work was so ahead of its times?

The second part of the performance is a moment of silence and contemplation. Lang’s composition uses excerpts from the Biblical Song of Songs. The ascetic, litany-like nature of the of the piece with repeated refrain, a slow, wistful and sensitive counterpoint of the violin and cello, was accurately rendered by the sopranos: Katarzyna Guran, Zuzanna Hwang, Magdalena Łukawska and Joanna Stawarska, as well as altos: Dorota Dwojak-Tlałka and Agata Flondro. The choir created an intimate atmosphere in the interiors of Krakow’s Cricoteka, shrouded in pleasant twilight. The performance of Just was great without staging, and the set design was limited to small lamps. The decorations turned out to be unnecessary – it was all about exposing the music.

These days, contemporary art is rarely moving – more often than not it provokes discussion, asks questions, or serves the role of a social commentary. However, Tomasz Cyz succeeded in both these aspects. Reflection & emotions. Cassandra & Just. All summed up with a long round of applause.