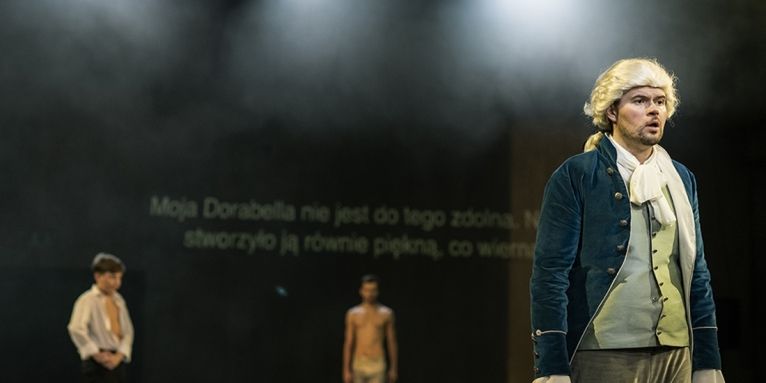 Some say that all women are alike – unstable in their feelings, even though they promised. In Così fan tutte Wolfgang Amadeus Mozart portraits them with certain humour and brilliance. Is the plot of this opera a standard formula for love? Così fan tutte (Thus Do They All) is an opera buffa in two acts with a libretto by Lorenzo da Ponte, commissioned by the Austrian Emperor Joseph II. Its première took place on 26 January 1790 at Vienna’s Theater an der Burg, and the success of the opera, confirmed by the first ten performances, was unfortunately overshadowed the emperor's death.
This work, which is widely believed to be one of the best of operas of all time, aroused much controversy in the 19th century. People denied its artistic values and it was widely believed to be a fluke in the composer’s opera work to date, decried for its frivolous nature. Is it true that the result of cooperation between the musical genius, master of opera and author of librettos to masterpieces such as Le nozze di Figaro and Don Giovanni was in fact a failure?

The carnival – the time of entertainment, masked balls, and… the Opera Rara Festival. A time when our social standards and rules cease to apply. Cosi fan tutte gets rid of this corset of moral obligations and injunctions. Farce, cynicism and irony are combined here with poetic undertones, while the plot focuses on love intrigue and disguises. Two officers, Ferrando and Guglielmo, praise the beauty and virtue of their fiancés – two sisters, Dorabella and Fiordiligi. The old sceptic, Don Alfonso, who listens to them boasting, doubts that the women’s feelings are true and stable, and makes a bet with the two officers, asking them to test their lovers’ hearts. His test requires young men dressed as Albanians to try and seduce the two sisters; however, when they take on their roles, they also become victims of their nasty desires, as when they seduce their partners, they experience the pain of betrayal. The atmosphere of a masquerade and impersonating various characters, stage tricks and the motif of infidelity brings Così fan tutte closer to an earlier opera by the Mozart – da Ponte duo – Le nozze di Figaro, as well as many more.

Tears, sighs and fainting – all fleeting

In the 18th century, the atmosphere of moral freedom became one of the most important topics for art. In 1782, Pierre Choderlos de Laclos’s Les Liaisons dangereuses – a work that stirred quite a scandal at the time, and a classic work of indecent literature – was published. Then Mozart and da Ponte took up the subject of manipulating the language of feelings and seduction in their Don Giovanni. Cosi fan tutte was their response to the frivolous feats of the male protagonist and womanizer. By analysing women’s nature, the composer and librettist ridiculed the Enlightenment sentiments and unwavering faith in the stability of feelings. Così fan tutte is a manifestation of Mozart’s unbroken sense of balance between playing with his characters’ feelings and sentimentalism, between tragedy and comedy, morality and sensuality. Among Mozart’s operatic triad, composed to illustrate the librettos by da Ponte, comprising Così fan tutte, along with Le nozze di Figaro (1786) and Don Giovanni (1787), the former focuses on various emotional states of the protagonists, and it is the one work marked by the greatest emotionality. Its libretto develops logically and in a funny way, while its situational humour and the atmosphere of theatrical entertainment make us perceive it in a different manner than past generations. These days, Così fan tutte entertains, teaches and warns us not to play with feelings.

Not a new thing – but a new rendition

Così fan tutte is another feature of the Generation Opera stream of the Opera Rara Festival. The popular stage work will be presented in a completely new way, as Cezary Tomaszewski – a choreographer, performer and director known for his unconventional musical performances presented with Capella Cracoviensis (Monteverdi in a milk bar, Gluck in a gymnasium, and Moniuszko in a Krakow salon) is responsible for directing the popular piece. Tomaszewski is appreciated for his brilliant humour and perverse way of talking about simple things. He does not put music on the pedestal and sparks debates with his performances.

The feelings and intrigues of the protagonists in Così fan tutte will be subjected to a scientific analysis aimed at learning the algorithm of emotions and sensuality – the alchemy of love.