Opera Rara tirelessly presents unusual, rare, rediscovered and completely unknown works. This time the festival takes us on a journey from the earliest days of opera to the present day. We will see Monteverdi’s Baroque “Il ballo delle Ingrate”, Purcell’s “Dido & Aeneas” and Marcello’s “Cassandra” (combined into a single spectacle with the contemporary pieces “Just” by Lang and “Vanitas” by Sciarrino), Mozart’s classic “Così fan tutte” and Eötvös’s “Del goldene Drache” from 2014. All spectacles will be available on PLAY KRAKÓW.

Last year’s Opera Rara Festival was held just before the outbreak of the pandemic. The world was turned upside-down soon after, and music and culture were forced to completely change track. The festival returns in a new reality, with a quote from the Greek poet Sappho “Stand up and look at me, face to face, my friend” as its motto.

This year’s Opera Rara Festival will be held online, naturally on the PLAY KRAKÓW platform. It is important to us in these difficult times to remember fans of the beautiful genre of opera. The pandemic is posing ever new challenges, yet recent months have shown that we can and will act: we are creating new events, bringing artists and audiences together, building bridges and conducting dialogue. I hereby present the programme of this year’s festival, although I should add that exact dates are yet to be confirmed. We hope that you will join us this year as just you have before! says Izabela Błaszczyk, Director of KBF.

As masks have become an essential everyday prop, we have been looking more closely into one another’s eyes, searching for emotions. And it is these emotions which mark the beginning of understanding and finding humanity in one another. This is something we really need in this time of anxiety, uncertainty and fear, and it is something explored by works presented at this year’s festival.

Welcome to the 2021 Opera Rara Festival! We are boldly standing up to the adversities facing today’s world and the arts and education in particular, since we see it as our duty to shape reality into a poetic form. We present spectacles, concerts, educational events and activities popularising opera. Our aim is to fill our everyday lives with meaning, and we do this by breaking the rules, because it’s what makes life beautiful. Festival events will be spread over several months. This is a major change, but it sets a new precedent and gives us an opportunity to turn the festival into an important event in Kraków’s cultural calendar. Opera Rara brings spectacles, concerts and meetings, and it means curiosity in the world around us, seeking new paths, breaking stereotypes and changing the way we think – as the great dramatist Wyspiański once said, “art and free thinking – fearless gods”, adds Jan Tomasz Adamus, artistic director of the festival. 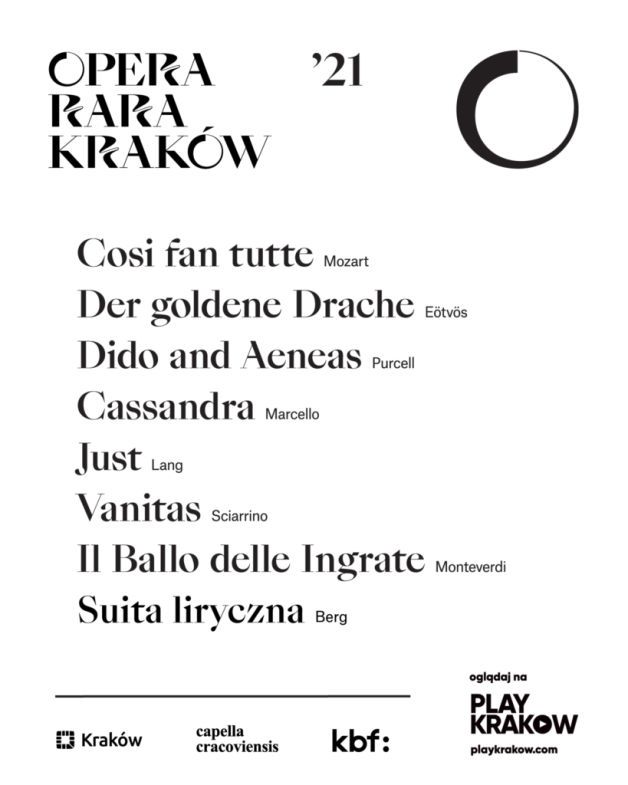 The Opera Rara Festival opens with Henry Purcell’s “Dido & Aeneas”, streamed on PLAY KRAKÓW on 1, 2 and 3 February. The opera, first presented at the festival in 2017, has been adapted into a stage version by Natalia Iwaniec. The director and choreographer seeks inspiration from Sicilian Baroque architecture and the Gaga dance vocabulary developed in the late 20th century. The performance resounds with interpersonal conflict and emotions described by Purcell through music.

Benedetto Marcello’s “Cassandra” also returns to the festival repertoire, this time as a solo performance, presenting a major challenge for the charismatic counter-tenor William Towers. Director Tomasz Cyz combines the Baroque work with David Lang’s contemporary composition “Just” and, for the first time in the festival’s history, Salvatore Sciarrino’s “Vanitas” – a poetic meditation on evanescence and transience for solo mezzo-soprano, performed by Natalia Kawałek. The spectacle will be streamed on 7, 9, 10 and 12 February. Alban Berg’s “Lyrical Suite” and Anton Webern’s “Langsamer Satz” are also streamed on 7 February. They will be performed by Airis String Quartet, with Berg’s composition featuring the soprano Dorota Szczepańska singing a “secret” part handwritten by the composer on a single copy of the score discovered in the 1970s.

“Il ballo delle Ingrate” is Claudio Monteverdi’s mischievous morality play, presented at last year’s festival. It tells the story of ties between life and death, humans and gods, and – most importantly – men and women. Director Magda Szpecht enters into dialogue with the 17th-century librettist to ask pointed questions about the nature of these ties. The Baroque score is complemented by Teoniki Rożynek’s contemporary composition.

“Così fan tutte” was, for a long time, Wolfgang Amadeus Mozart’s least well-received opera, with the libretto stirring the most controversy. The opera finally returned to favour in the mid-20th century, and ever since then it has been at least as popular as Mozart’s other works. Previously shown at the 2019 festival, the spectacle is directed by Cezary Tomaszewski, always bringing elements of the unexpected to his productions. Music direction comes from Jan Tomasz Adamus.

In turn, Péter Eötvös’ “Der goldene Drache” (“The Golden Dragon”) is a newcomer to Opera Rara. The Hungarian composer’s dazzling music was inspired by the libretto by Roland Schimmelpfennig, telling the story of illegal immigrants in Europe. The tragicomic, absurd, grotesque and in places brutal opera is an important element in any discussion on immigration, as is its universal – and painful – message.< It is directed by Karolina Sofulak (producer of last year’s “Vanda”) and performed by the Spółdzielnia Muzyczna Contemporary Ensemble under the baton of Edo Frenkel.

Dates of “Il ballo delle Ingrate”, “Così fan tutte” and “Der goldene Drache” will be announced in due course.

The Opera Rara 2021 Festival is organised by the City of Kraków, KBF and Capella Cracoviensis.