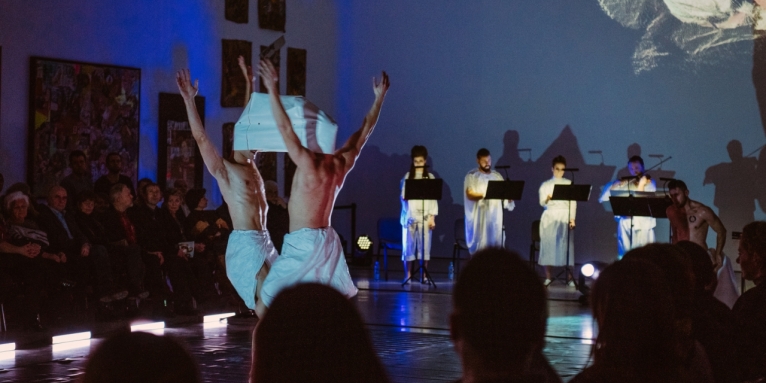 Philip Glass’ work gives the director and other artists a total freedom to interpret it and make any story they like out of it, while asking the question of how to invite the audience into the world of opera, which has no plot to follow and no protagonists to identify with. The final stage rendition of A madrigal opera, which was not defined by the composer, can take different forms, depending on the director's concept. It also enables the viewers to perceive and understand the work in various ways – something that is hardly difficult with Krzysztof Garbaczewski’s metaphorical and artistic vision.

This chamber opera, composed by Philip Glass in 1980, is not at all reminiscent of his two earlier famous stage works: Einstein on the Beach and Satyagraha, with delightfully defined characters and a documentary plot. A madrigal opera, on the other hand, is not an opera in a traditional sense of this word – there is no narrative, no characters, no libretto, no arias, and no recitatives. In reality, this piece is an example of abstract and demanding musical theatre, forcing the director to create events on stage, that will remain consistent with music, forcing the performers to be precise and to deal with the text limited only to abstract syllables, asking the listeners to focus and persevere in tension.

Glass’ music is not easy to play. Repetitions with slight metro-rhythmic shifts, sharp chords, fast arpeggios and vocals based on syllables give it an abstract and ascetic, yet intense nature, which keeps the audience on the edge of their seats. The score of A madrigal opera offers no time for rest for performers and listeners alike. Over the modest instrumental cast of the violin and viola duo (Radosław Pujanek and Aneta Dumanowska), the audience can listen to the polyphonic vocal parts performed by a six-person ensemble (soprano Antonina Ruda, altos Joanna Kurek and Justyna Ołów, tenor Krzysztof Mroziński and basses Michał Dembiński and Marek Opaska) – according to the composer’s intent to imitate the 16th-century Italian polyphonic madrigals. The ensemble of performers met the difficult challenge posed by Glass, drawing attention to themselves with a style loosely referring to the 16th century – pinned-up hair, strong eye make-up and costumes reminiscent of Baroque collars.

The repetitive nature of the work gives the impression of a trance, as well as looping structures and musical moments. The same idea was used for designing choreography for actors/dancers, who presented the process of the birth and evolution of human beings. In the first act, we see the emergence of beings from enormous covers, hatching out like chicks out of eggs. They come out of bags and hide in them again, flex their muscles, wriggle on the floor, initiate interactions among each other. The repetitiveness of movements and slow acting evolves along with the narrative and develops in a certain dance, creating a coherent, group choreography. Garbaczewski chose dance as a medium to tell the story of birth and beginning, which seems to be a logical consequence of the composer’s inspiration with the work of choreographers and the process of subjugating the music to drama. The narrative of the performance, made up of metaphors, acting etudes, abstract visions and sometimes surprising associations, produces a visual image. Garbaczewski’s vision goes well together with music, while the set design and costumes of actors-dancers, dressed in white diapers and translucent white tops, kept the performance in a minimalist and austere convention.

The act of creation

A madrigal opera returned to the stage of the Opera Rara Festival. The premiere of the performance took place in 2017, in the hall of Blessed James in the Franciscan monastery, which added a raw, ascetic touch to the piece. This year, the organisers made the decision to stage its performance at MOCAK. Glass’ perverse experiment can also be perceived as a sign of not only a desire to enter a new territory, but also of the composer’s cunning – with newer and newer ideas for its stage interpretation, A madrigal opera will constantly remain a contemporary piece – not only open, but also an enduring one. And the act of its creation, as well as the music of Glass, will constantly play out anew.