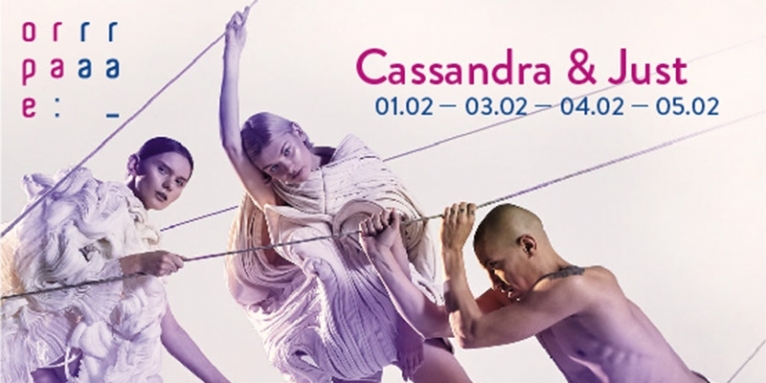 The Opera Rara Festival does not shy away from experiments, juxtaposing musical opposites: contemporary post-minimalistic style with expansive and rich aesthetics of the late Baroque, librettos of works inspired by religious texts with poetry drawing upon mythology, a story of fulfilled love with the drama of an unrequited one. Contrasts are a true and lively game that is worth playing. Just (after song of songs) by David Lang (born in 1957) and Cassandra by Benedetto Marcelli (1686-1739) were created nearly three hundred years apart and they differ in many features – from the music genre, through style and history, to tradition. What do they have in common?

Cassandra is a large cantata, composed in 1727 by Benedetto Marcelli for alto and basso continuo. The libretto was based on the poetry by Antonio Schinelli Conte, who joined the composer to create a series of experimental cantatas inspired by Greek mythology, and in the case of this work – Homer’s Iliad.

Cassandra – daughter of Priam, king of Troy – is a tragic character. Stunned by her beauty, Apollo gives her the ability to see the future. This gift, after Cassandra rejects the god of beauty and music, becomes her curse. As Apollo’s curse said, nobody believes her catastrophic prophecies, and her fears and warnings fall on deaf ears. The libretto of the cantata is a story told by Cassandra, about the final years of the Trojan War.

Since the beginning of the 17th century, the cantata has been one of the most frequently used vocal forms in Italian music. Marcello himself composed more than three hundred and fifty of them – apart from psalms, they constitute the most representative way of artistic expression of this artist. Although none of the cantatas were published during the composer’s lifetime, two of them – Timoteo and Cassandra – gained considerable recognition as early as in the 18th century. The piece was outstanding because of a number of factors – the libretto of the cantata was written in the form of a monologue, the composer did not shy away from mixing and juxtapose recitatives with arias and ariosos, he also decided to embellish the piece with various harmonic tones, exposing its emotional and expressive nature.

At the Opera Rara Festival, the cantata will be performed by soloists, with a larger vocal cast than called for in the original: Łukasz Dulewicz (alto), Helena Poczykowska (alto) and Przemysław Bałka (bass). Basso continuo will be performed by Marcin Świątkiewicz. one of the most outstanding harpsichordist of the young generation, as well as Konrad Górka (cello) and Andreas Arend (theorbo).

New York’s David Lang is considered to be one of the one of the most outstanding composers of contemporary, American and film music. Heir to Steve Reich, inspired by the style of Philip Glass, is sometimes referred to as a post-minimalist. Despite the fact that on the one hand his music appears to be sophisticated and demanding focus, on the other hand it is perfectly accessible.

In the ascetic and meditative piece Just (after song of songs) from the soundtrack to Youth (2015, dir. Paolo Sorrentino), Lang used fragments of the Biblical Song of Songs. The composer was particularly intrigued by the fact that the book gives a man and a woman various features that they see in each other. While this is not surprising in a purely interpersonal relationship, in an attempt to interpret the Song of Songs as a metaphor for the love of God and humankind, these characteristics can be read as indications of the nature of God himself.

The stage version of Lang’s work for the Opera Rara Festival was directed by Tomasz Cyz, playwright of the Grand Theatre – National Opera in Warsaw during Mariusz Treliński’s term, co-creator of Terytoria – a series of premières on the Chamber Stage of the National Opera, author of a libretto for Fedra, an opera by Dobromiła Jaskot, musical and literary journalist, author of radio plays. In his book Arioso, Cyz wrote: “Music is madness, but beautifully performed music and theatre that is perfectly composed and played, is even crazier. Nothing more is needed.”This is one of the best promises a director can make to the audience.

Once every creator was contemporary, and every contemporary author will cease being one in future. Time is relative, trends and fashion disappear, yet universal values remain current. Do contrasts push us apart or bring us closer together? What does Benetto Marcelli’s Cassandra and David Lang’s Just (after song of songs) have in common? Perhaps it is opera – cantatas have narrative, dramatic action and a form made up of recitatives and arias, while film music – such as Just – recurring musical motifs assigned to protagonist and events that constitute the action. Another of their common denominators is also beautiful singing and the Opera Rara Festival, with an evening dedicated to those two pieces, during which we will discover fresh contexts and new variants. Cassandra & Just will be a show about war, death and pain; about love, truth and human nature, above all times and divisions.